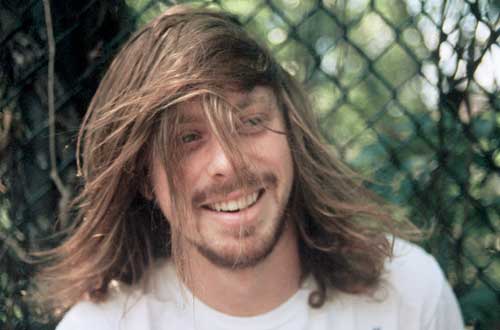 Without a dedicated filmer, a skate scene often never makes it on the map. Or fades into obscurity. But with virtually no outlets for footage these days, other than the stinking Youtube cespool, it has become nearly impossible for a filmer to get any compensation for his work. But there are those rare videographers out there who do it purely for the love and the respect of the craft. Ryan Garshell is definitely one of these rare few.
In the beginning of working on the MIA video I was traveling down to Miami at one month intervals and realizing how impossible it was going to be to complete a full-length video with a thick list of pros and ams that lived 1,300 miles away from me. But thanks to the contributions and dedication of Ryan G and another Miami filmer Mike Atwood, the video is well approaching completion. I had never really spent much time around Ryan before starting the MIA project but soon found myself trading off angles and receiving heaps of footage from the kid. I was pretty surprised to see someone who's so little known was doing such amazing filming work. Especially in the sketchy hills of San Francisco, which give the most seasoned pros a run for their money. Ryan has sharp opinions and isn't afraid to tell a skater that his idea is wack. I think that's a good thing, as it shows in his footage which is often well thought out and carries an air of completion when a line comes to an end. Ryan is also notorious for unearthing spots in any city he spends a little time in and he finds a pretty solid amount of pride in this fact. Driving around Miami any spot we'd discuss would often be prefaced by the phrase ‚ÄúThat spot I found….". But fair enough, with the laziness of most people in this industry it is refreshing to meet someone who's willing to put in the effort to dig up new and fresh ways to hit a city.
I caught up with Ryan recently and asked him to put together an edit of off-cut footage. I was surprised when he delivered a Quiktime that challenged the length of Petillo's edit of a few months ago.

What's happening Ryan? Where are you answering these questions from right now?

Just thriving in the tenderloin in sf right now getting myself together to leave.

Oh that's right, you're leaving to Paris in a couple days. Thanks for doing this interview so quickly….Well, let's start with where you're originally from and when you started skating?

I started skating around 1998 when I was 10 in the suburban wasteland known as Palm Beach Gardens, FL.

How long was it until you picked up a video camera?

I'm gonna say around age 12 after I had seen ‚ÄúModus Operandi" then shortly after I saw ‚ÄúStatic" and was sparked to pick up a camera.

It seems like you've been pretty involved in the Miami scene for a while now. How long ago did you move down to Miami?

After years of commuting using the trirail train, public transportation and finally a car that I eventually sold. I finally decided to move into the budda palace about two and a half years ago.

For a while it seemed like you were one of the only filmers down there. With so many skaters needing coverage, how did you juggle being able to film everybody?

Well honestly I didn't. I would try and film with a lot of people but i don't feel like I captured everyone that Miami or Florida in general has to offer. There's infinite talent in Florida and there's still so many people that need filmers. But I film because I enjoy it, so I usually stuck to skating with my good friends when I was living in Florida. Mostly guys from West Palm, Miami and the Tampa areas. Mainly skaters like Brian Delatorre, Ben Gore, Yonnie Cruz, Jimmy Lannon, Paul Sakoff, Bagel, Steve McClintock, Richie Zuzcek, Forrest Kirby, Danny Fuenzalida, Joel Meinholz and a bunch of other great friends.

So you made the move to San Francisco a year or so ago…..why?

Well I actually wasn't planning on moving hahah. I kind of went out for my secod time to sf, I had been a time before for around 3 months staying at the puppy pound. I came back out to work on the mia video basically to film with Brian and ben and wound up staying because some bullshit went down back at the budda and I felt like I had so much more to capture with these guys and other friends I aquired here. Basically the hills got me hooked too its challenging but so fun to film on them.

It seems like there wasn't much coming out of SF for a while. But I've been seeing a ton of great stuff over the past year or so. How is the scene out there now?

Um. That scene question is hard to answer. It's great in a lot of ways but i feel like at times I wasn't even skateboarding when the scene was the best here. But I'm not trying to take away from all the good things that are going on now. I'm really hyped on rasa libre and everything they are doing and I have my good friend Zach Chamberlin staying with me right now who films really well. So I feel like both us constantly filming is giving a lot more skaters the chance to be captured. Look out for the new Rasa video Zach has been working hard on to drop soon! It's really good.

Hahah that's a touchy subject. I'm not anti-HD or anything at all. It just doesn't feel the same for skate videos. I'd love to have one to work with. But I just feel like the VX is timeless and as long as I can work with that camera in skateboarding I'd like to. Even if I'm the last to upgrade I'll be okay with that.

Looking at the full spectrum of skate videos around the globe, who and what have you found most influential and/or inspiring over the past few years?

This is a hard one because I'm influenced by so many things(filmers, cameras, skaters, locations, etc) so I know I'm bound to leave a lot of stuff I find really important out. So I'll just say some filmers I've always looked up to are Dan Wolfe, Bill Stroebeck, Joe Perrin, Mike Atwood and of course you.

Well, I like to ask this question of any filmer I talk to….if you could make the ideal independent video and you had your choice of skaters from any era in their prime. Who would be on the roster?

Ahhh!! Another really hard question! can my video be five hours long? Hahah if those were my options I could probably never choose so first off I'm gonna say Mike Daher
Others would be people like Keenan Milton, Danny Renaud, Ethan Fowler, Jahmal Williams, Bobby Puleo, Ricky oyola, Stevie Williams, Josh Kalis, Van Wastell, Mark Gonzales, Brian Lotti, Dennis Busenitz, Kenny Anderson, Julien Stranger, John Cardiel, Carlos Young, Jason Lee, Rob Pluhowski, Jason dill, Anthony Pappolardo… there so many I could go on forever but i'm really lucky I've had the opportunity to film my good friends who I feel are blessed with some great style and ideas too!

So is there any chance of seeing a full length video from you in the next year or two?

I wish, I just don't want to settle I guess. Right now in my life I don't exactly have in my reach everything I'd like to in order to make what I'd feel good about. I feel like I have some more dues to pay before I could come out with a video. I guess not just for a sale purpose but to honor the skaters that I would need putting in their hardest efforts into making a video. Basically I don't want to drop a video ‚Äúby this random dude from Florida" featuring a bunch of people who I feel are amazing and need to be seen but not as many people are gonna see it because for one I don't work with a lot of monetary funds to say. I mostly scrape by doing what I like wich is my choice I guess, but it's the only way I can film as much as I do and get the clips I do. Instead I'm mostly looking forward to having my work featured in videos that I've looked up to since I was little. I feel blessed to be able to work on the mia video with you in charge of all the editing and finalizing of the video. And I'm hoping to have footage in the next static maybe after those come out I'll work on something independently.

Tell us about a few underground skaters you're backing these days that a lot of us may not know about yet.

Well, you've been pretty integral to helping make the MIA Skateshop video possible. How has it been filming for that project?

It's been amazing I never thought when I was younger that I'd ever be getting to work on something so important to me. Ed and Chris thank you so much for everything.

Who's part do you think is going to hit the hardest?

Everyone is killing it I think everyone is putting it down and everybody has something different to offer but Im really excited for everyone to see Joel destroy.

Well, I can't thank you enough for putting together this edit for Theories. It's nice to see some sick new SF footage and such a sick mix of skaters. What's in the future for Ryan Garshell? Paris?

Of course thanks for having me and the homies featured. As for my future, I'm headed to France on tuesday for 5 weeks my first trip out of the country i am so excited! Then back to SF and who knows from there.