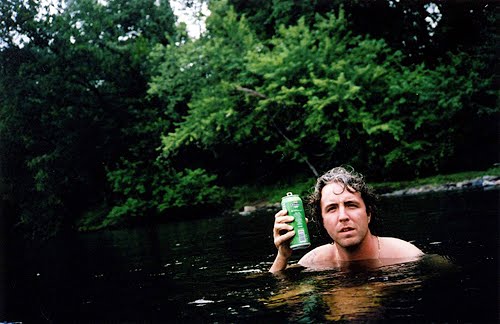 Andrew Petillo and his band of vagrants are some of the few remaining gritty and raw elements left in skateboarding and usually quite stoked on anything I see from this crew. With pretty much everything going the way of polished, crystal clear HD imagery in the skate video world, it begins to feel like the soul of real street skating is slowly dripping into the sewers of time. I was recently watching Andrew's Youtube channel and it hit to try and con him into doing an edit for Theories somehow. But after mentioning the idea to him, he was at my door with a new Quiktime just a week later no questions asked. I expected a minute or so of random comedy and a few skate clips, but was pretty shocked to discover over 4 minutes of Alex Davis, Fred Gall, Steve Durante, Quim Cardona, Josh Kalis, Jerry Mraz, Brian Wenning, Devon Connell, Jon Newport, Lem Go, Guru Khalsa, Joel Meinholz, Josh Dowd and even Danny Renaud ripping the streets.
While I had Andrew's attention I figured I'd ask him a few questions before I posted his edit. Here's what he had to say.

So, which came first…..the skateboard or the camera?

The skateboard man. I was skating for years before i got into filming.

Alright then, what got you into skateboarding. Anyone who's been skating before there were video games, movies and MTV shows has a story behind what motivated them to first step on a board. What's yours?

I got into skateboarding when I was a small kid.  I remember it was my birthday, maybe my seventh. Anyways the kid who lived across the street from me shared the same birthday.  We both got a lot toys and stuff and I remember he got a board.  He wasn't really interested in it but I loved it. I think later that night my parents took me to toys r us and got me one. So ever since that day thats when it started.

So, you're saying your first board was a Toys R Us board then? Tight…....What got you involved with Alien and Habitat? Seems like you've been filming for those guys for as long as I can remember.

I guess I got involved with those guys thru Steve and Fred.  At the time Steve was on flow for them and he would always have to send them footy.  Here and there I started skating with Fred too. I guess Joe liked the way I filmed and one day I got phone call from Joe saying ‚Äúyou wanna film for us?"

You film with some of the most notorious maniacs in skateboarding. How have you maintained your sanity all of these years?

That i do for sure.  Well i guess im in the middle of all that.  Im not a normal human or a complete maniac.  So i think with the people i haveto deal with balances out pretty well.

Who would you say are your favorite skaters to film with?

My Friends.  The people you usually see me skating with or in my little edits i make.

OK then…How about this: What would be the ideal video you would make, if you had your choice of any skaters in history during their prime?We'll give you 6 full parts. Go.

Does anything stick out to you as your most memorable tricks or days filming? Like, if you were forced to make a reel right now, that had to be 20 seconds long, which tricks, lines or hijinx would you throw into it to sum up all these years of filming for you?

Thats a good question.  I really don't have any favorite tricks that i've filmed.  Everything is my favorite i could say.

When are you gonna do a music video for Quim?

Hahaha,  I've been working on it for years now.  Every time i go to meet up with him he'll show up and then disappear into thin air.

Why haven't you done your own video yet? Seems like you could've almost put out a full length project with just all those NJ Scum edits you've put up on Youtube.

Yeah i don't know man.  I ask myself the same question all the time.  I think after im done working on the new habitat video I'll start putting something together.  If i make a video i want it to be real.  Now a days everyone and their mother is putting out a video.  Which is cool, but i don't really get hyped of them.  For now i just make these little edits with footy that has gotten lost over the years.  It's something for me to do during the winter while i sit in my house and drink.

I know that you aren't making bank filming skateboarding so I assume you have some sort of weekday job that allows you to film skateboarding when you can. What kind of work do you do on the side?

Well my parents run a wine rack company. They do jobs for wine stores, liquor stores, wine cellars, homes, etc. It's a pretty cool gig I got going. Im learning a lot from it and making some money on the side.

Well, considering that the life you've chosen isn't necessarily making it rain money from the sky, what is your motivation for picking up the camera and getting back out there every day?

Sometimes I do get bummed.  I'll think to myself and say no matter what Im with my friends and having fun. Just enjoy these times while I got them.

Damn, that's a good way to look at it.

Oh man there are so many…I remember on time we were in a Outback in Miami and Danny ordered some wings.  And when they came out he was like…
‚ÄúWhere did you get those wings from?"  ‚ÄúThe basement?"
Might sound shitty but it was hilarious.

New Jersey for life or what?

Of course man!  I think need a change for a bit though.  Maybe i'll try to do big things up in NYC.

What can we expect from you in the future? Are you working on a new Habitat project?

Yeah i guess Joe is trying to put a new video out by Mid June or something.  It's going to focus more on the ams.  Im really only dealing with the east coast stuff.
As for me maybe you'll see a trailer for a video one of these days.  I plan to put something out by 2012

Well, I know that you're a bit of a purist…..what're you gonna do when the day comes that nobody is accepting VX-1000 footage any more?

Well if someone buys me a HD setup and gives me a check to film, then yeah i guess i'll do it.

What skater should we be looking out for in 2010?

Thanks to everyone who has helped me out along the way.  Take good care of your feet.