Who is Matt Nordness? 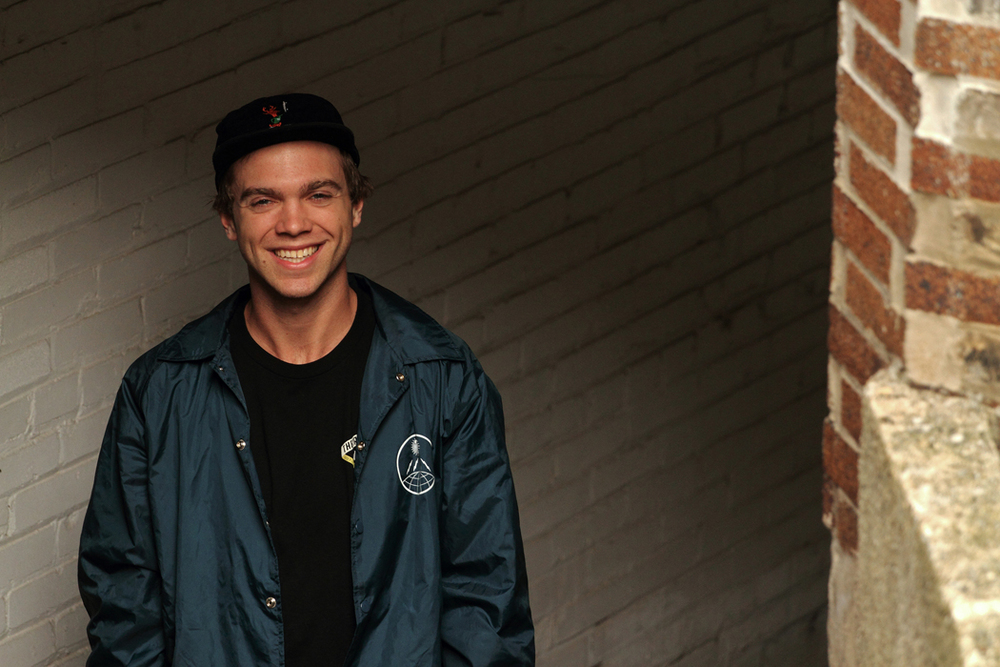 Photos and Interview by: Bradford Bishop

It's hard enough to get noticed in the skateboarding world these days considering how good everybody is. But you at least stand a chance if you live in California or, in recent phenomenon, New York City.  But if you live anywhere w/in the interior of the United States it's so difficult that you almost have to cover your body in lighter fluid and set yourself ablaze to get some eyes pointed in your direction. But in my opinion, it's these little-known cities and underground scenes that often have some of the most interesting styles and personalities.

Meet Matt Nordness. Matt is a beast on a skateboard. He shreds, films and shoots photos on the regular, yet you probably have never heard of him. The reason for this is most likely because he lives in Milwaukee, Wisconsin. Not exactly the center of the skateboarding industry. If it wasn't for a good friend of Matt's who lives in the Chicago area, Brett Weinstein, we would never have heard of him ourselves. So, thanks to Brett and also photographer Bradford Bishop, we can introduce you to one of the best kept secrets of the midwest. - Josh Stewart

Whatsup Matt? I'm going to go ahead and assume most people reading this don't know much, or anything about you, so what's Matt Nordness all about these days?

Well, obviously skateboarding. I've been playing and listening to music a lot lately and I'm a nurse at the local Children's Hospital.

How has skateboarding been treating you this year? 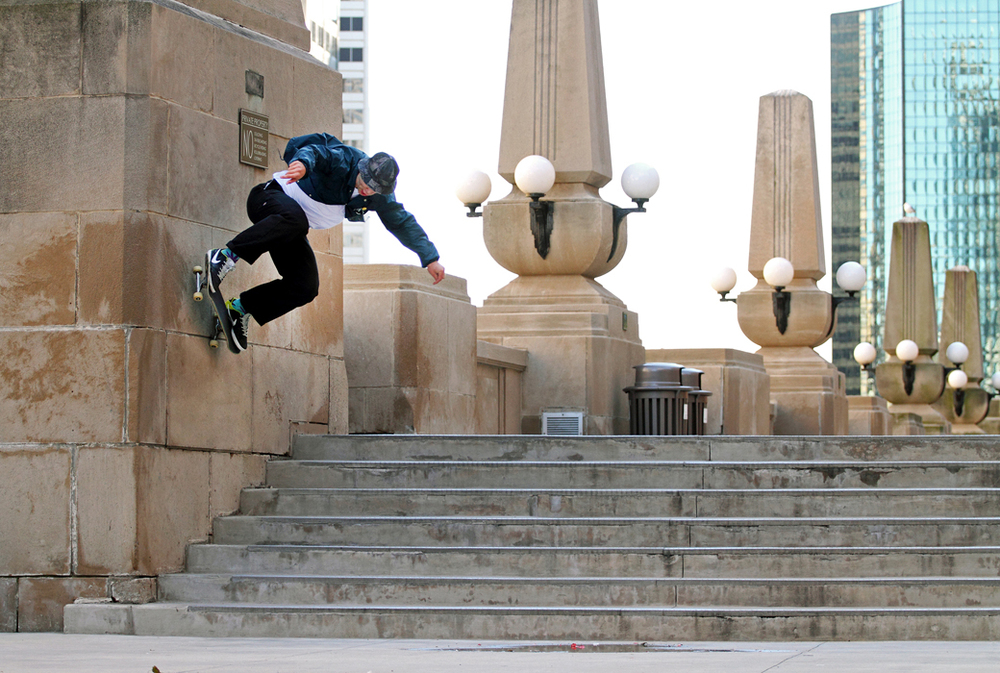 Every time I see you, you're always smiling. Why are you so happy all the time?

I feel like I'm just a positive person in general, I don't know, maybe it's because nothing bad has ever happened to me? I guess I'm just always stoked on what I'm doing. Skating gets me hyped, I love my job, Playing music is awesome and I'm always happy when I'm eating! I guess I just don't have a good reason to not be happy.

You have diabetes, is that something that bums you out?

It's not all that bad. It only really affects me when I'm out skating if I've been skating hard all day. There's times when it sucks for sure. The worst is when you're in the middle of trying a trick and you just know your blood sugars low and you have to stop and chill out and eat a snack. I've had it since I was 16 so I'm usually prepared. 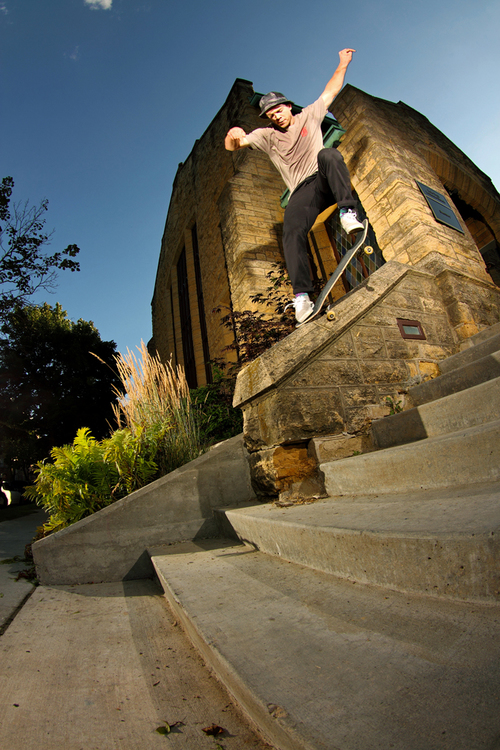 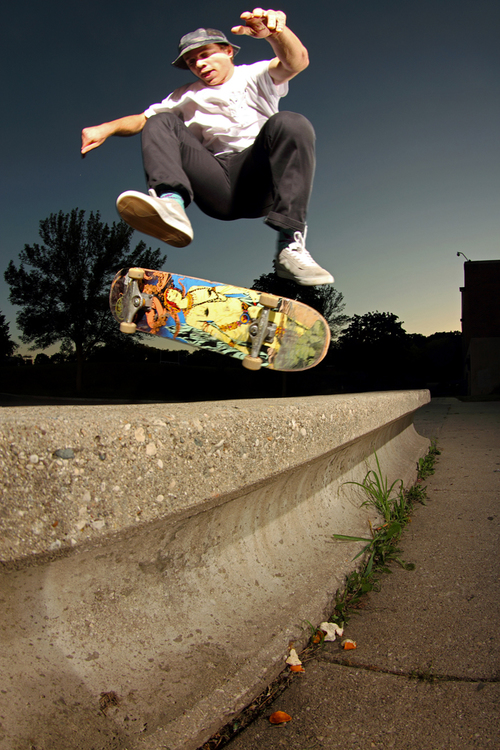 What has been like growing up and skating in the Midwest?

I've loved it, tough with the winters, but up here in Milwaukee we're pretty lucky being able to skate Cream City Skate Park whenever we want. The winters definitely make the spots a bit tougher to skate but I'd say that's what makes skateboarding in the Midwest what it is.

Do you feel like the Midwest gets the amount of coverage it deserves in skateboarding or do you think it could use a bit more? 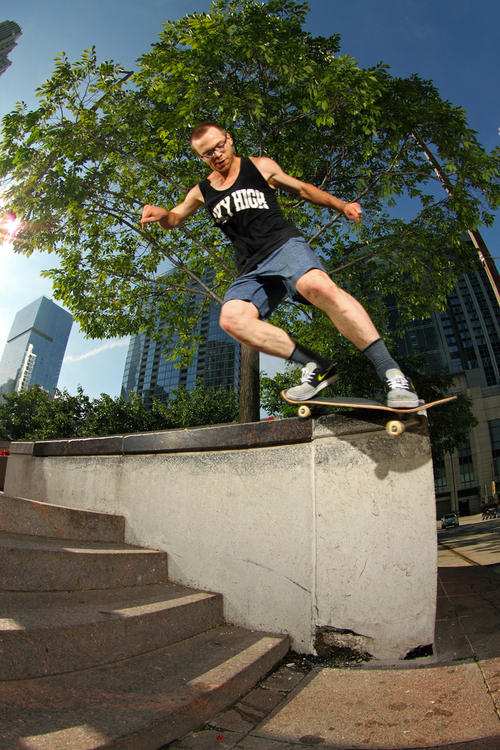 I have mixed feelings about it. I kind of like that no one really talks about all the cities out here and that it's kind of a hidden gem in its own way. The Coasts dominate. Always have and probably always will. I like the fact that the Midwest is usually an afterthought with most Skateboarders living on the west coast or east coast. But at the same time I love watching most Midwest videos more than some of the newer videos coming out of the west coast. The spots out here just look better than what most people are skating out there. That part gets to me.

So you don't see yourself moving out of Milwaukee to the west coast to get a little more out of Skateboarding?

I don't know, I think about that all the time, but I just think I like Milwaukee and the Midwest too much to leave but at the same time it'd be cool to try something new. I don't really have an answer to that right now. I grew up here and all my friends are here and I still have a bunch of fun skating here, so I don't know.

You're a full time nurse, how does your work life mix in with skating?

It's actually pretty good. I only work 3 nights a week so I have a bunch of time to skate whenever I want. I have no complaints about how working and skating are going right now!

Are you working on filming for anything with anyone at the moment?

Yeah! I'm currently filming with Josh Ellis (WIskate) for his new video as well as Mark Dunning and John Schmoldt for their new Deep Dish video. It's been a lot of fun skating in Milwaukee and Chicago. It's crazy how different the two cities are for skating, but it's made it a lot of fun this year going back and forth from the two. 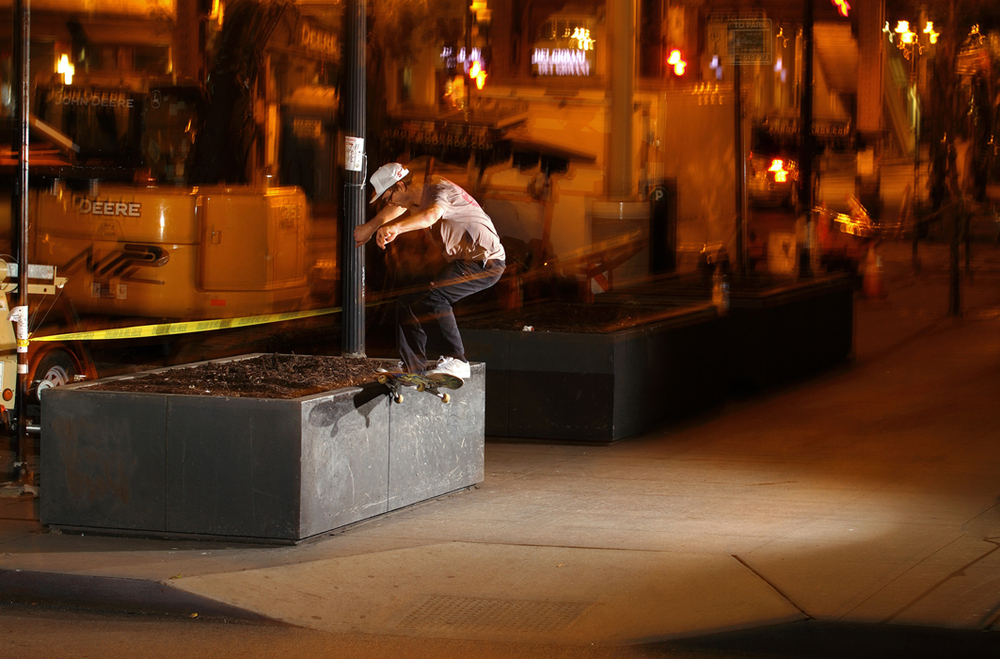 Do you have any trips planned before this year is over?

I definitely want to go out and skate in Pittsburgh, I was out in NYC about a month ago and it was a blast so I'd really like to get back out that way one more time this year. Maybe go somewhere in California once winter hits here. That would be ideal. 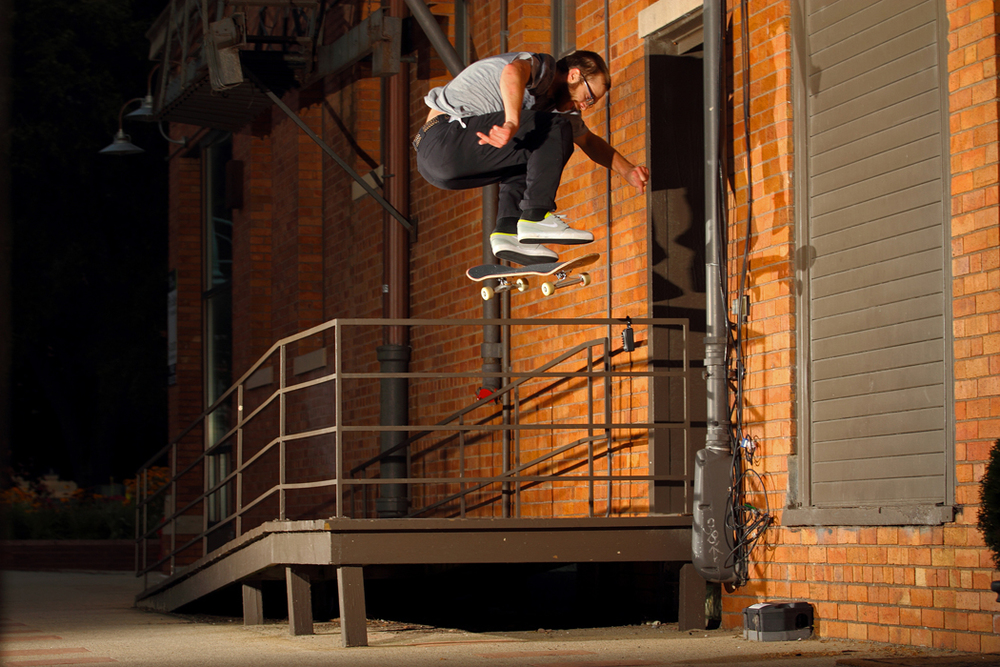 You got anybody that you'd like to thank for helping you out along the way?

Bill at Cream City and Aaron at Sky High those two do so much for Milwaukee skateboarding. Scuba over at Nike, all the homies, Insulin for keeping me alive, you and Josh for always filming and taking photos of me. Oh! And Mort and Angie for making me!