From The Mouth of The Brodies 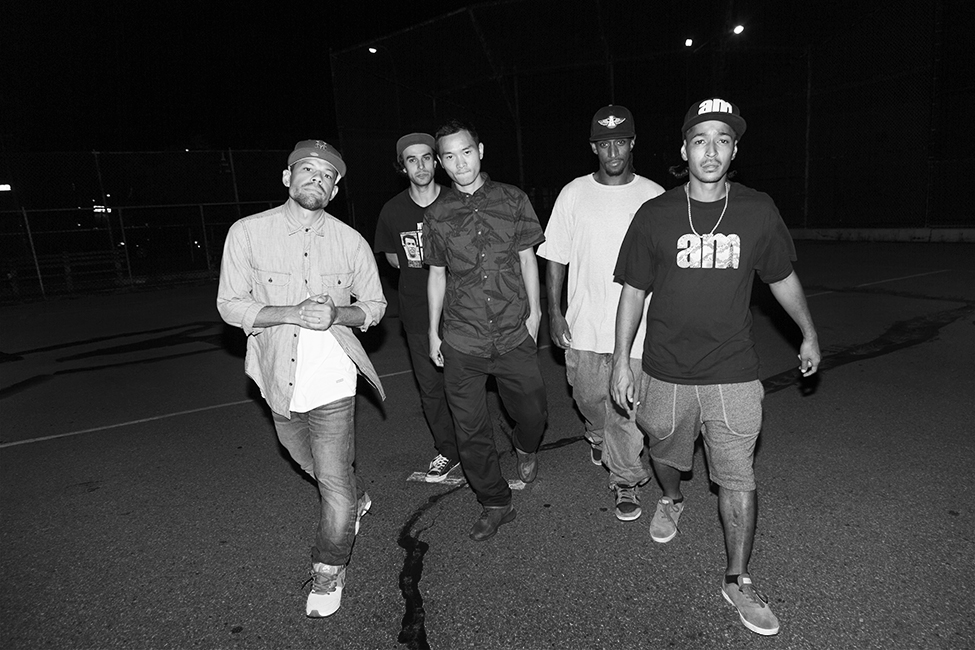 As I was sitting around trying to decide what to write about the newest independent skate video project out of New York City I was at a bit of a loss. Dank Magazine out of Norway JUST released an interview with the maker of The Brodies, Jeremy Elkin, and it was yours truly who had the pleasure of doing that interview. So I wanted to take a different approach for the TOA site and tell a different story. Then it hit me. The only way to truly get across the vibe and feeling you get when watching this video would be to get a sampling of the personalities of all of the skaters involved in the project. So we caught up with 10 of the major players in the new Brodies video and NY photographer Pep-Kim shared some of his amazing behind-the-scenes photography to help illustrate things a little more clearly.

Some skate videos rely solely on the skills of the skaters featured in the project. But Jeremy Elkin set out with a very different approach when he started working on The Brodies. After watching this video as I tried to recap it for a friend I realized I found myself trying to describe the personalities in the video instead of the tricks or spots. That's what makes The Brodies stand out and keeps it interesting. The incredible collection of personalities that paint an awesome picture of the New York skateboarding scene. A scene that is not only diverse in it's cultures but also in it's multiple generations and personalities that make it very uniquely New York City. The Brodies is an incredible prism of styles and we decided to give you a short glimpse into the minds that make up the personality of the entire project. We asked each main skater in the video 3 questions. Starting with the filmmaker Jeremy Elkin. Let's see what we turned up:

If 'The Brodies' were like a team of superheros that would form together like Voltron to fight crime and evil, what would each individual's super power be?
Leo would distract the enemy by telling a ten-minute story that has no ending. Akira, the sweatpant ninja, would dropkick the villain in the face as Rob crushes him with his handshake of steel.

What was your motivation behind "The Brodies" and what were you trying to do differently that you hadn't done in your older videos?
"The Brodies" began when I started to attempt to film a Leo part right after finishing up Elephant Direct. Leo Gutman's been a close friend of mine for a long time, and I always have felt like his footage never showed his abilities properly. He likes to find his own spots, but more importantly skate them his own way. He moved from Coney to Staten around the time I moved to the city, so I immediately figured it would be impossible to make a full part. To add to his hour+ bus to boat to train commute, Leo works at the NutBox, is in school learning Chinese, has sleep apnea and a deviated septum and usually doesn't have the best sense of time. Because of that, he is the best dude ever. Alongside filming Leo, I really wanted to film with the older generation of guys in the city who never really had video parts and are some of the most hilarious characters in the city.

The video came together during the early stages of "Poisonous Products" in 2010. I began to set aside footage of Leo, Akira and Rob. In a lot of ways, that video was an experiment to see how a vinyl mix would work with skating as well as develop relationships with some skaters who I had always been psyched on. It was also a way to release rapidly aging footage while still contributing to Static IV and save random single clips for what would become "The Brodies." In terms of doing something differently, definitely the vinyl aspect. Making something that's impossible to recreate is my goal with every video, but I feel like I succeeded more with this new one than ever before because of the soundtrack and vibe of the video. 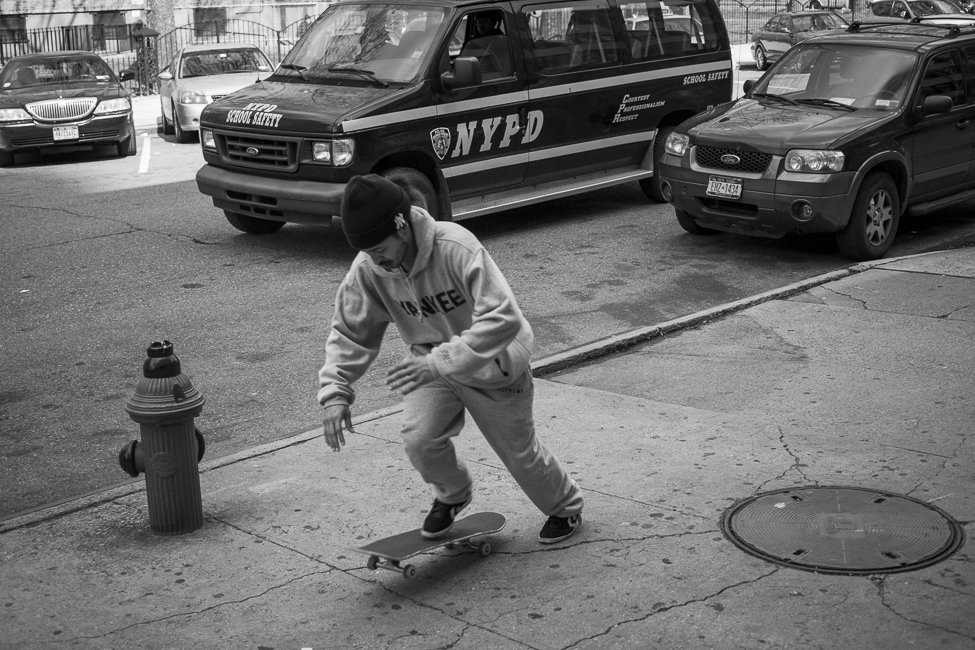 How does Supreme differ from when you worked there in the 90s and now?
Then I just use to work there. Now I'm doing my own brand AM AfterMidnight NYC that you can buy there.

Who are some of the best up-and-coming skaters in the city?
The AM crew is pretty sick. Watch out. Move out the way, we come through. 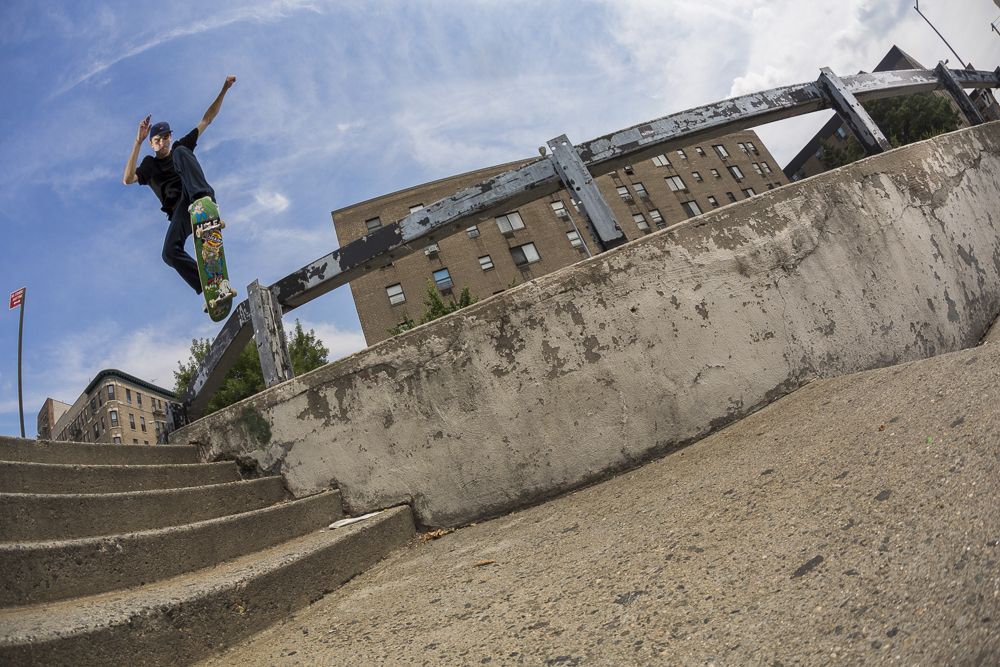 50/50 Ollie out and over the steps: photo courtesy of Pep Kim

Does riding a bike everyday for work help your skateboarding abilities?
The days I have to ride my bike for work I try to avoid skating afterwards. When I'm biking I'm not using the same muscles as when I'm skating. So if I were to try to skate after riding all day my legs feel like jello, even though I've been pretty much sitting all day. Riding my bike does help me find spots when I'm out cruising or out making deliveries. But as far as benefiting my actual abilities on my skateboard, maybe just my endurance and my calf muscles? Ha!

Top five donut spots in NY?
1. Donut Pub on 14th and 7th
2. Crown Donut across from the Bronx Courthouse
3. Doughnut Plant when you want the boutique donuts
4. Dough in Brooklyn
5. Any donut cart or Bodega donut is dope too 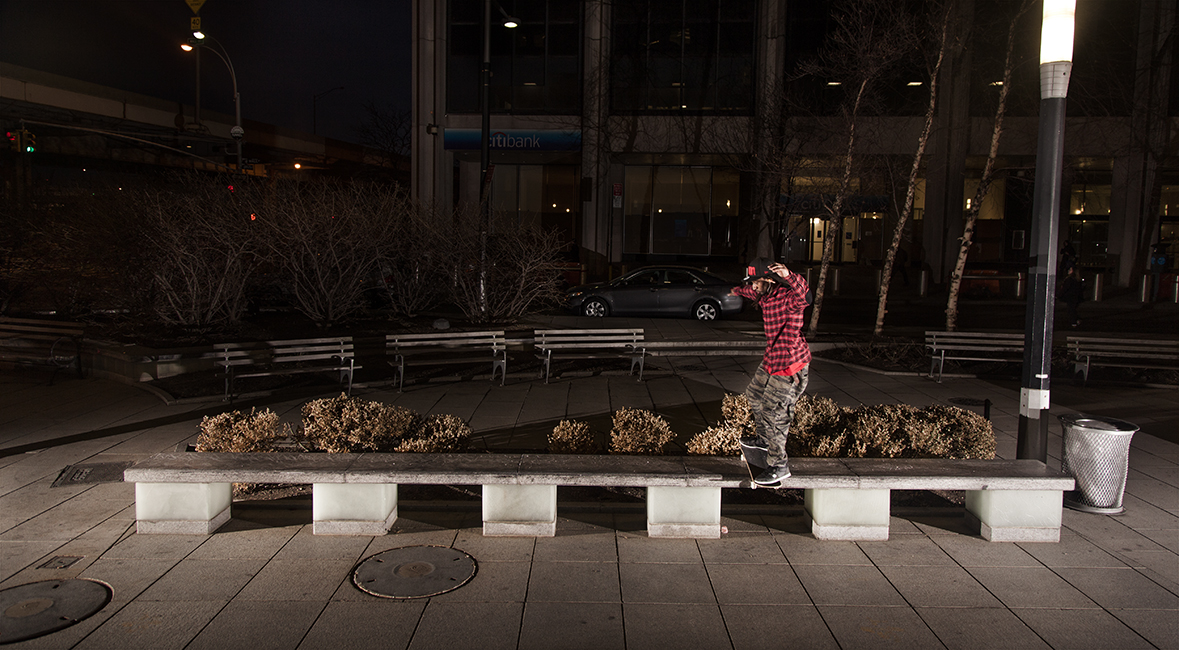 Frontside lip-slide from the Hudson River across lower Manhattan to the East River: photo courtesy of Pep Kim

Can you talk a little bit about the banks and who was ripping back in the day who never got shine?
Skating the banks in the 90s, everyone was ripping. Pushing around the city after the session ended.
Skating the small banks and all of the old contests. Kyle James was kiling it. Kyle James.

You got a quick Jamaica, Queens story?
Skating in the hood there was always wild ass shit going on. I remember I was 14 or 15 rollin' through Jamaica Ave. on the block and a fuckin' shoot out just broke out. Everybody hit the floor. I was like I gotta get the fuck outta here. I didn't stick around to find out who got shot or nothing. 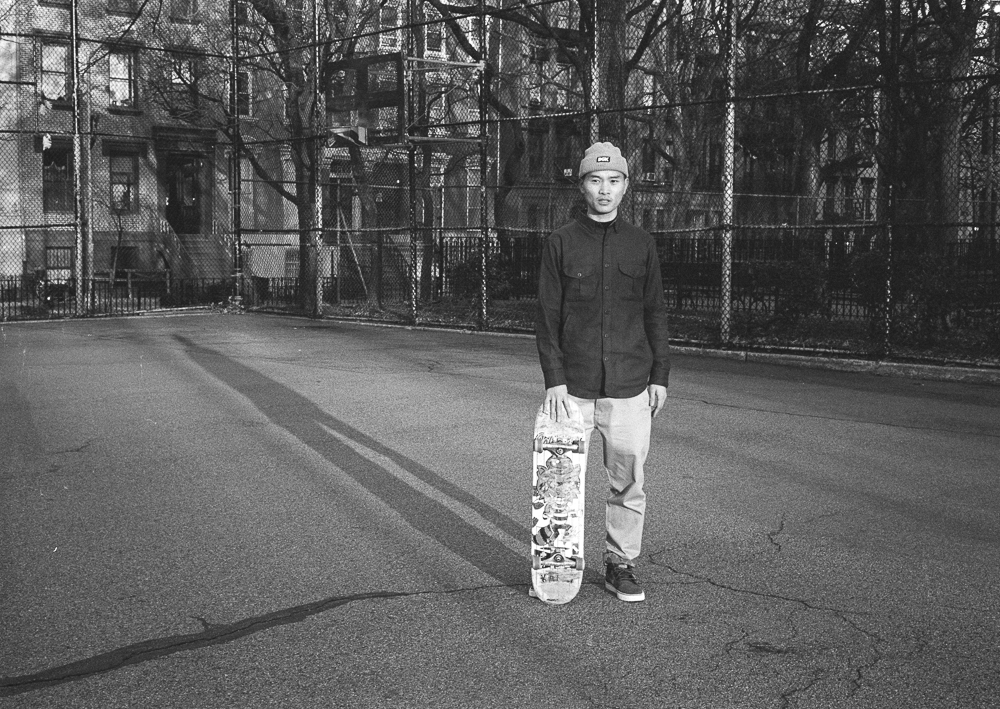 If you were trapped on a desert island with one Brody.. who would it be and why?
German. He knows his way around the beach.

Trick you've been trying to learn and can't land?
Jumping them railroad tracks. 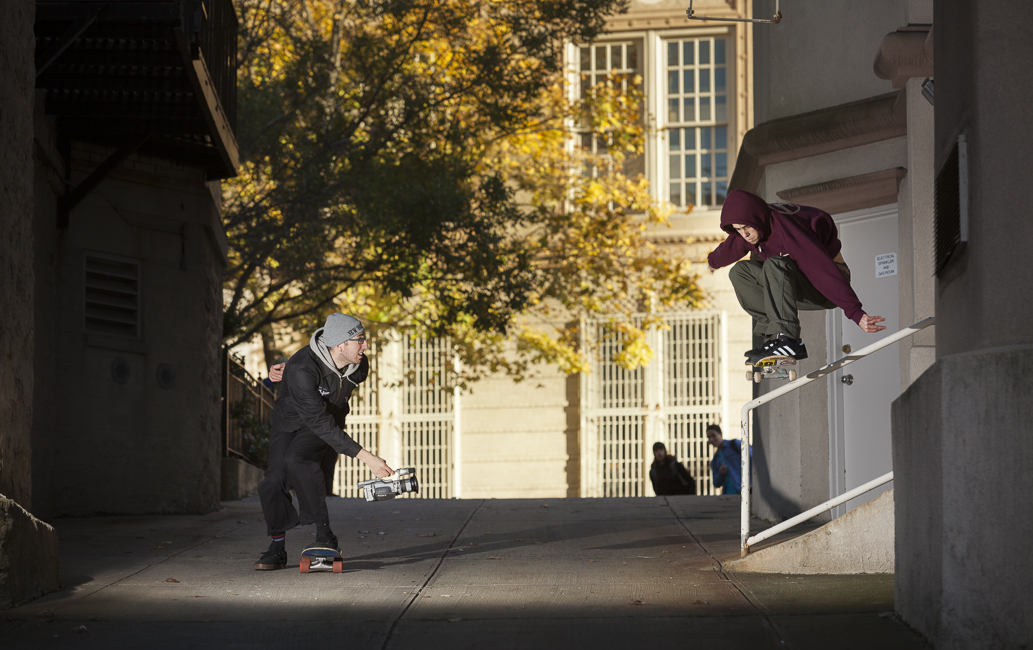 Baltimore finest ollies over the rail and down the hill with Jeremy Elkin in pursuit: photo courtesy of Pep Kim

Who has your favorite part in The Brodies?
Leo Fuego Gutman and a huge fan of Rob Campbell's flatground frontside wallride.

When's the last time you brushed your teeth?
Took a shower this morning, but forgot to brush :( 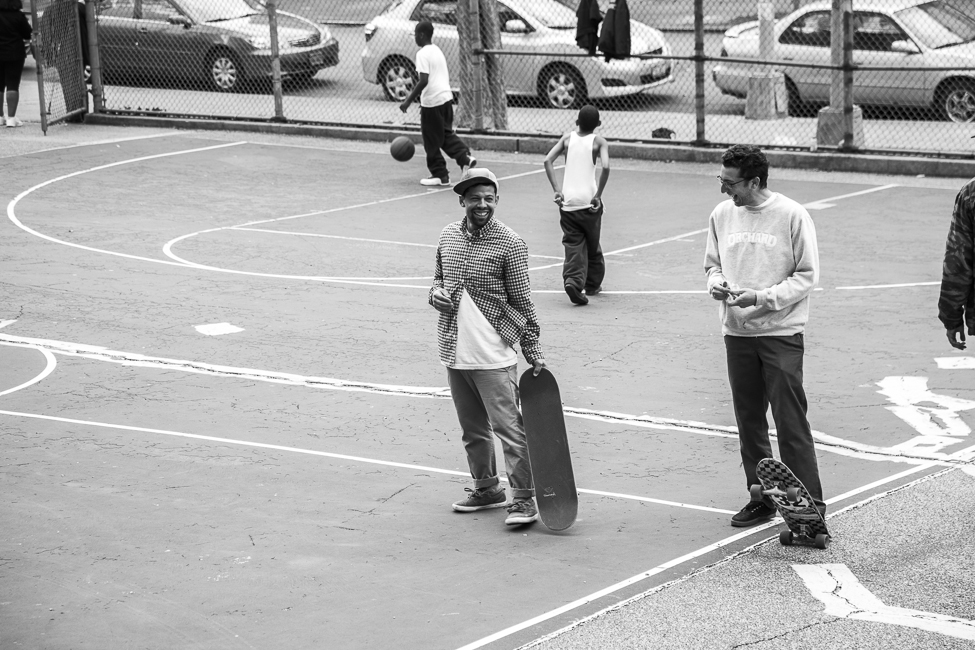 Please state your name, age and borough.
My name is German aka BIG GERM aka Papi Cesar aka Papi Suplex aka SupermanRolex‚Ä¶

Most memorable recent Rob Campbell quote?
That mug asked some random chick walking past by the downhill Canal St ledge, "Hey do you squirt?" and she turned looked at him and smiled. Maaaaaan I was like, WTF! hahahaa 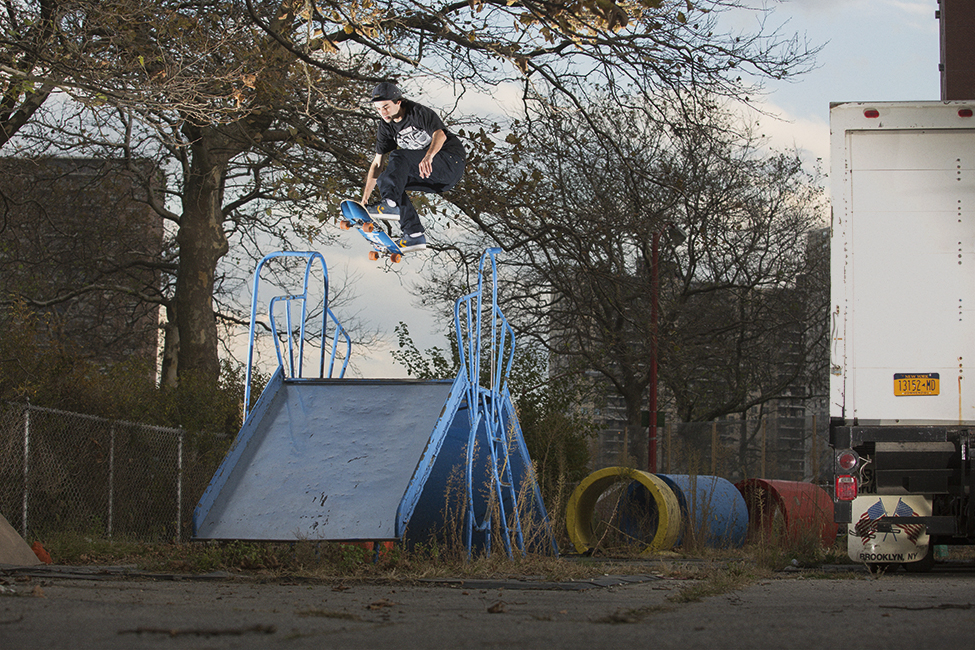 Ollie from slide to slide and from Manhattan to Staten Island: photo courtesy of Pep Kim

Who did you skate with in the city growing up?
It was just a couple of people from a local click from Brooklyn at first and then they introduced me to all sorts of people like Brian Clarke and Keith Denley from LI and we would skate with those guys a bit. As far as city kids it would be Mike Alexander from Yonkers, Bryon Winfrey from Queens and then later on I met Taji Ameen who is from the city. Me and Taji definitely grew up skating together, we would skate at either Tompkins or the other various lurk spots. We were more into just doing our thing and doing more transition skating at like the KCDC ramp or the Autumn bowl for example. So a lot of times it would be hanging out at the Autumn bowl with Scott Schwartz who is a guru and is the nicest most wholesome person in the world and shreds, or other people around the transition lurk spots. If it was street skating we had a little crew for a while and we rolled with this kid we called "Yago" for a little bit and to a lesser extent skated street with Kevin Tierney and Rob Campbell from time to time. We would also film with Jimmy Marketti who was a mad man and would wheel his generator around with him on missions to the other side of NYC! Billy Rohan was always there of course too. It was a lot of good times and such a blur growing up fast in the city. Taji is still the dude to make it all happen, he introduced me to the city basically and all these different facets of the skate scene. Owe it all to that dude!

What's your most vivid memory from filming for The Brodies?
There's so many good times I can't exactly pin point one memory. It felt like being in a pack of hyenas when we were all together, just non stop laughs. There was this one time when a security guard uptown walked an entire blocks distance to snitch on us to the cops for skating a different spot. Needless to say Akira schooled this fool verbally and left him completely breathless and aghast. "How are you gonna kick us out of here your not the real deal, you just a rent-a-cop, not even the man with the badge!" This was all in front of the cops who were very surprised by his point and actually took it into their own hands to restrain the over zealous rent-a-cop and forced him to back off into his own security booth almost getting him into trouble himself. All while Akira just strolled off casually on the hot summer day, shirtless with a towel over his shoulders while still talking shit to the guard with his little girl by his side, while the security guard was still standing there all disillusioned by what just happened. "You ain't even the real thing! Fuck outa here!" Akira kept taunting, just such a priceless scene.. He completely flipped the table on him.