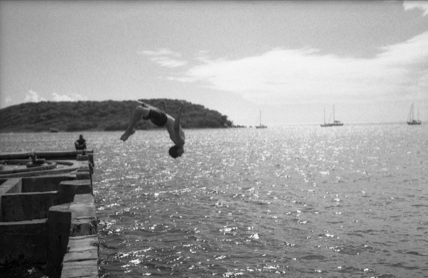 If you've never seen them, the GX-1000 Slap edits are one of the best web-video features out. Amazing filming, dope spots, solid editing and always a sick line-up of skaters. Ryan Garshell recently rounded up his caravan of wandering hippie shredders and set sail for the isle of Puerto Rico. And what resulted was one of the best skate offerings from GX-1000 yet. Our good friend Ben Gore was along for the ride and documented the whole trip for TOA. Our "imbedded" reporter if you will. He put together this rad story for us so kick back and enjoy PR through the perspectives of the GX-1000 crew.

The crew was Jake Johnson, Jonathan Cruz, Abdias Rivera, Alex Davis, Brian Delatorre, Ryan Garshell and myself. Majority of us being from florida and back in town for the holidays made Puerto Rico a quick and affordable place to travel. Affordable being one of the more important things considering pretty much all of us were paying for it out of our own pockets. But, with that being said, I wouldn't of wanted it any other way. We skated when and what we wanted to, not feeling pressured by a team manager or a company that put us up in a hotel. Straight to the point friends skating with friends.
To the average skater Puerto Rico is probably not the first place that comes to mind when planning a trip but this is soon to change. 'Never judge a book by its cover' is the best phrase to describe Puerto Rico in my eyes. Behind all the beautiful beaches, waterfalls in the rainforest and that Corona ad lifestyle is an island filled with aesthetically pleasing and diverse skate spots. You name it; rough, smooth, plazas, and bump to bars. They got it.
So heres a behind the scenes look at one of the best trips I've been apart of. Enjoy.
-Ben Gore (ALL PHOTOGRAPHY BY BEN GORE)
¬† 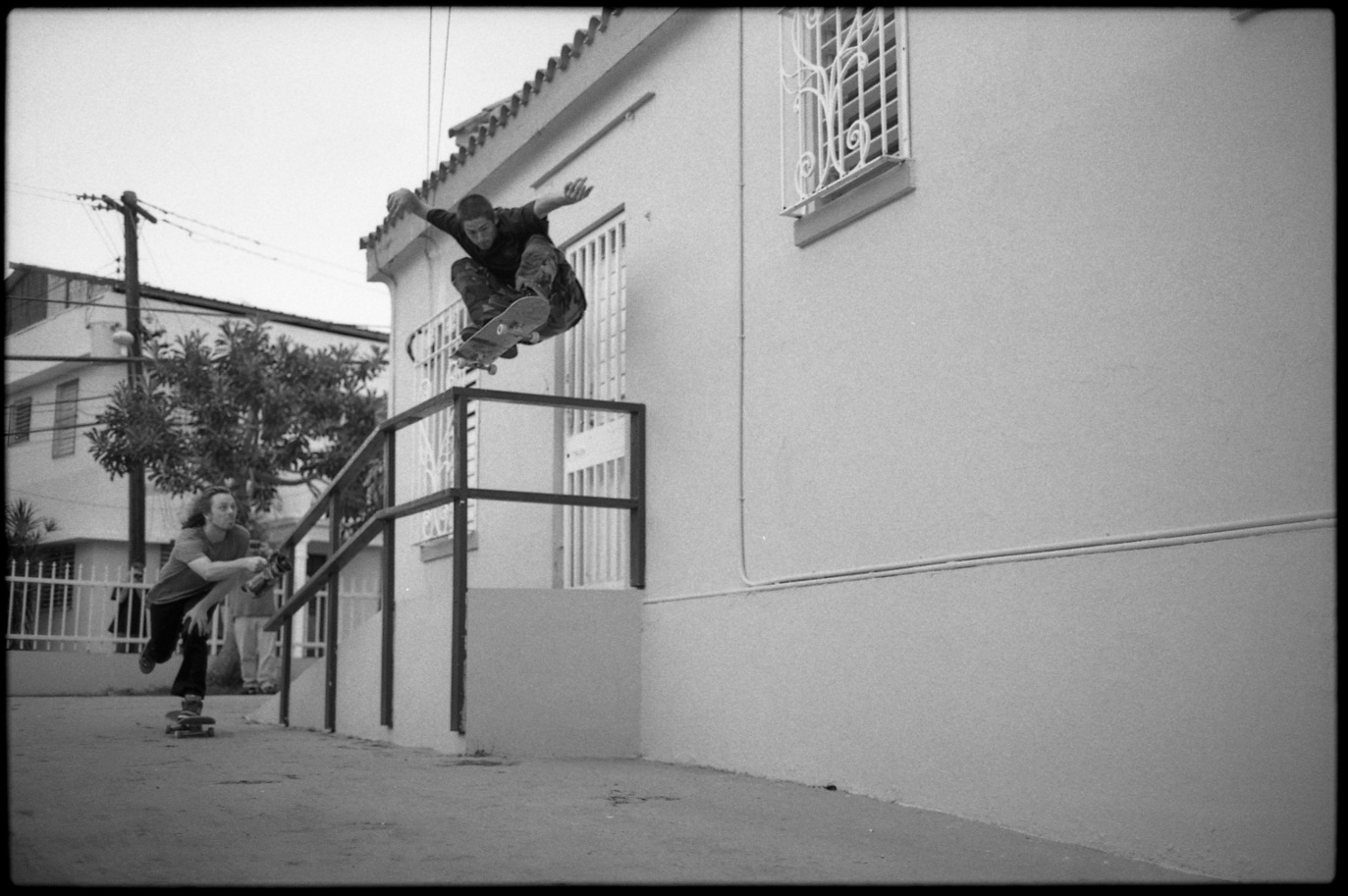 Ryan Garshell films while Jake Johnson blasts off to the moon 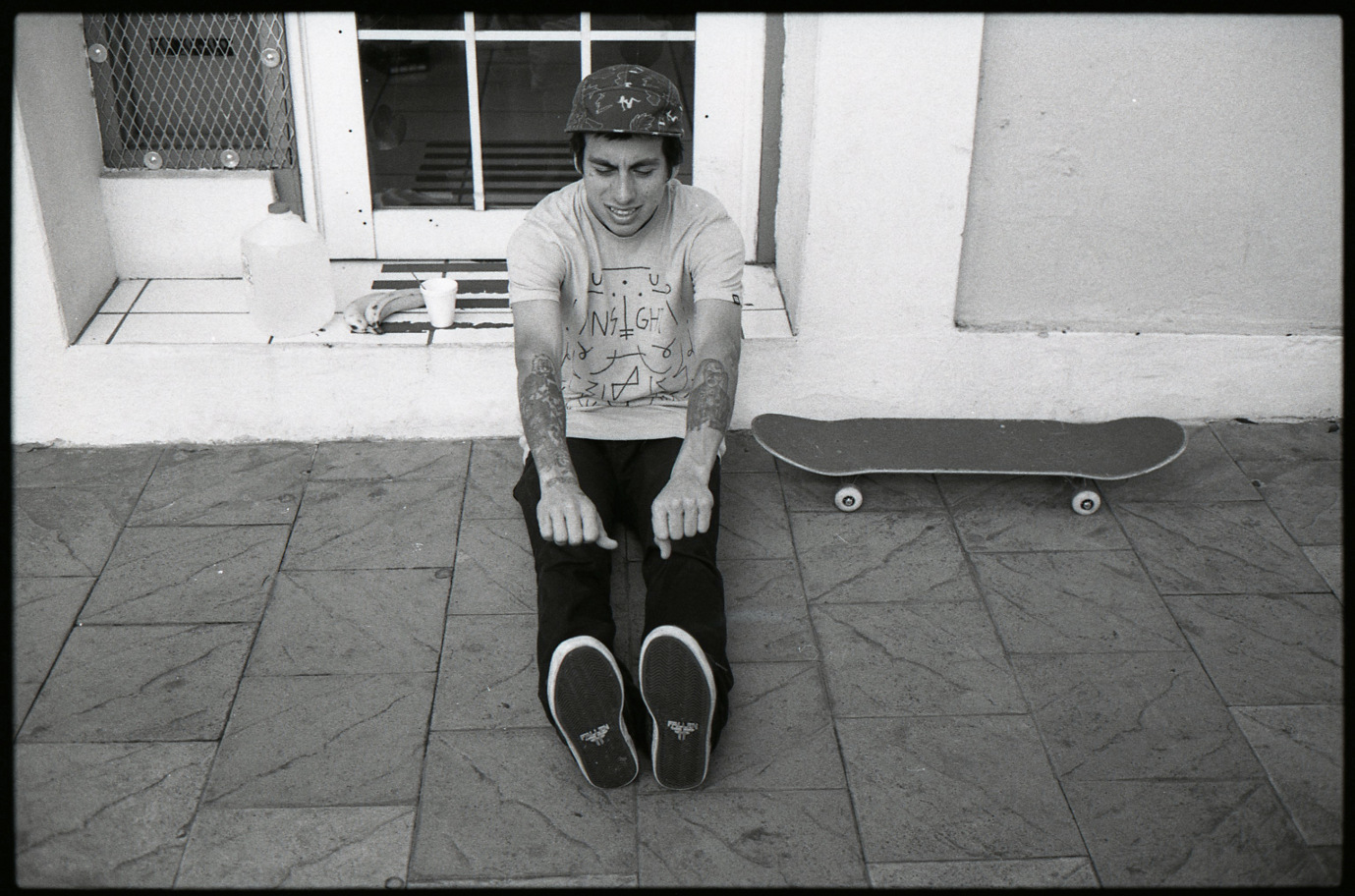 Well, I went from freezing my ass off in 15 degree weather up north to 80 degrees in this awesome place where you can drink in the streets and skate everywhere with out being hassled. The spots are amazing, new shit everywhere the beaches are beautiful, food is delicious. You can be in the middle of a small town shredding the plazas with your friends to jumping off of water falls in the middle of the jungle, unreal.
Would I do it all again? Hahaha fuck yes!
-Abdias Rivera 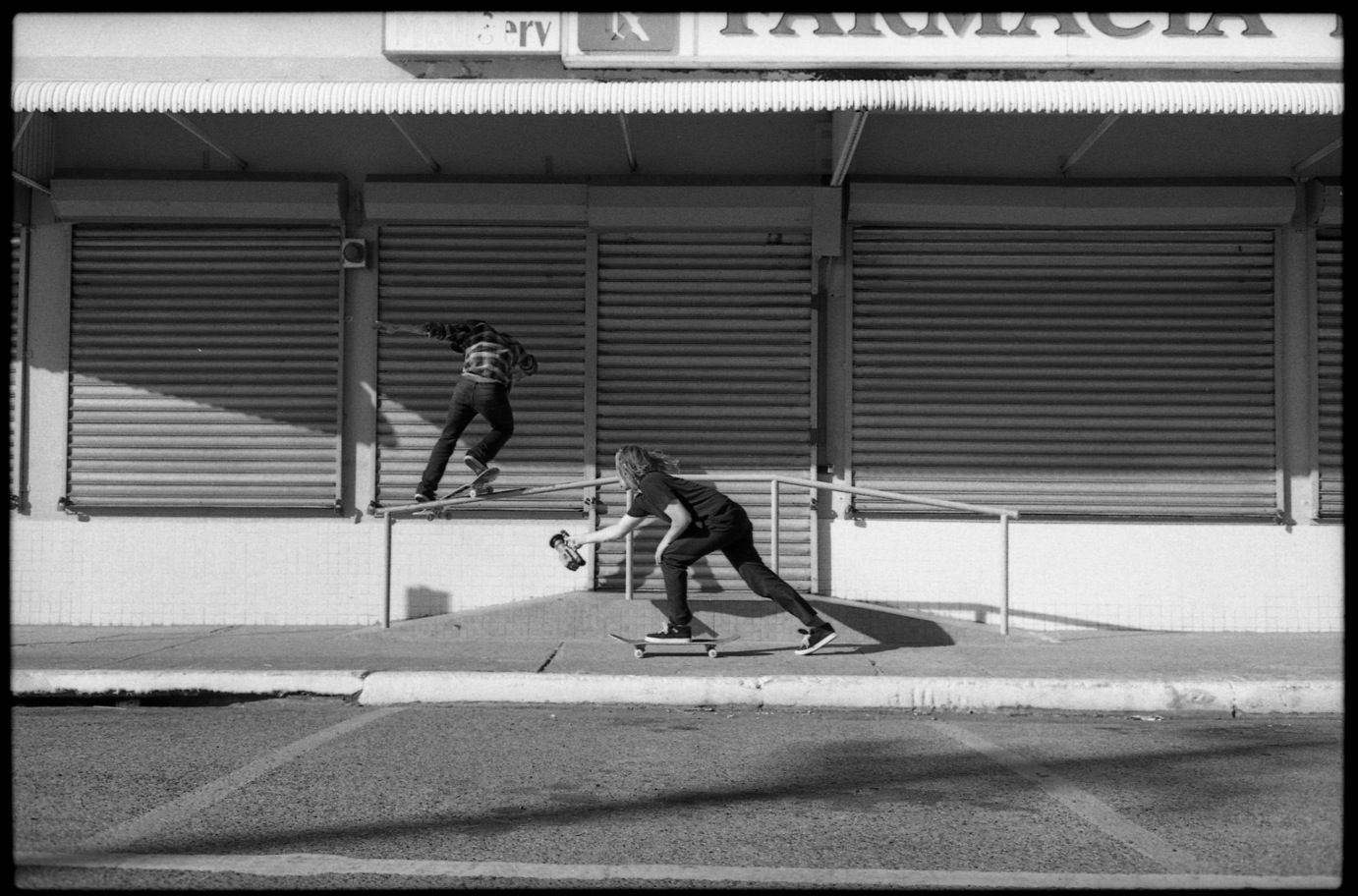 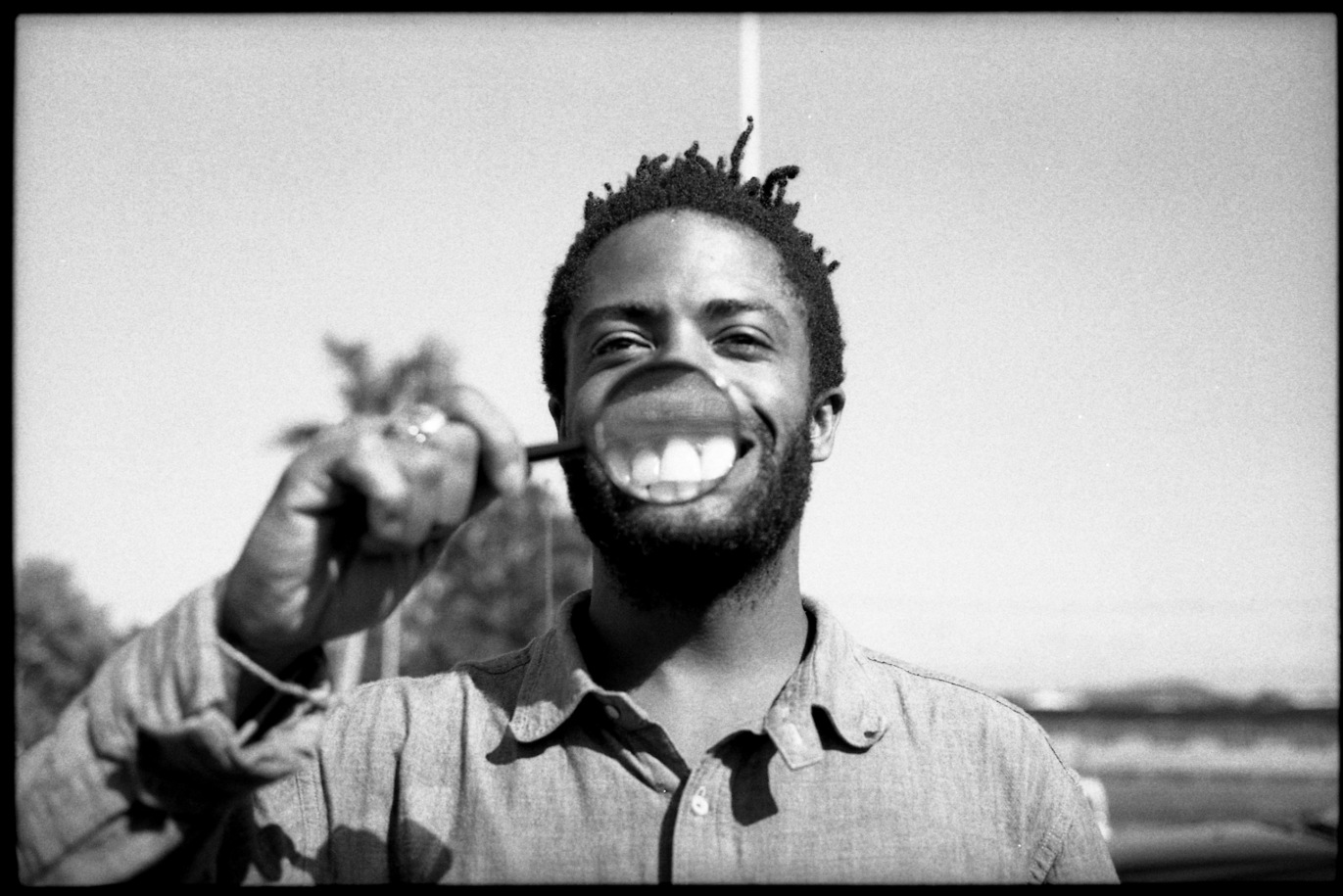 Aight picture this‚Ä¶seven skaters in a van filled with chronic smoke, six out seven people are drinking brews and that one person not drinking isn't the driver. This beautiful island with the most random skate spots, water falls, the juiciest fresh fruit from east to west that you ever tasted, a bioluminescent bay with water that will glow your body from head to toe. Did I forget to mention every woman's body in sight will remind you of a Fat Joe or Jennifer Lopez music video? Rice and beans has done miracles for every se√±ora on this island. I thought I saw at least 50 Rosario Dawsons while I was skating in the hood. Basically what I am trying to say to you dirts is once your done with your skater life crusade you should ride it out in Puerto Rico, I know I am going to do it. Until next time, peace.
-Alexander Davis 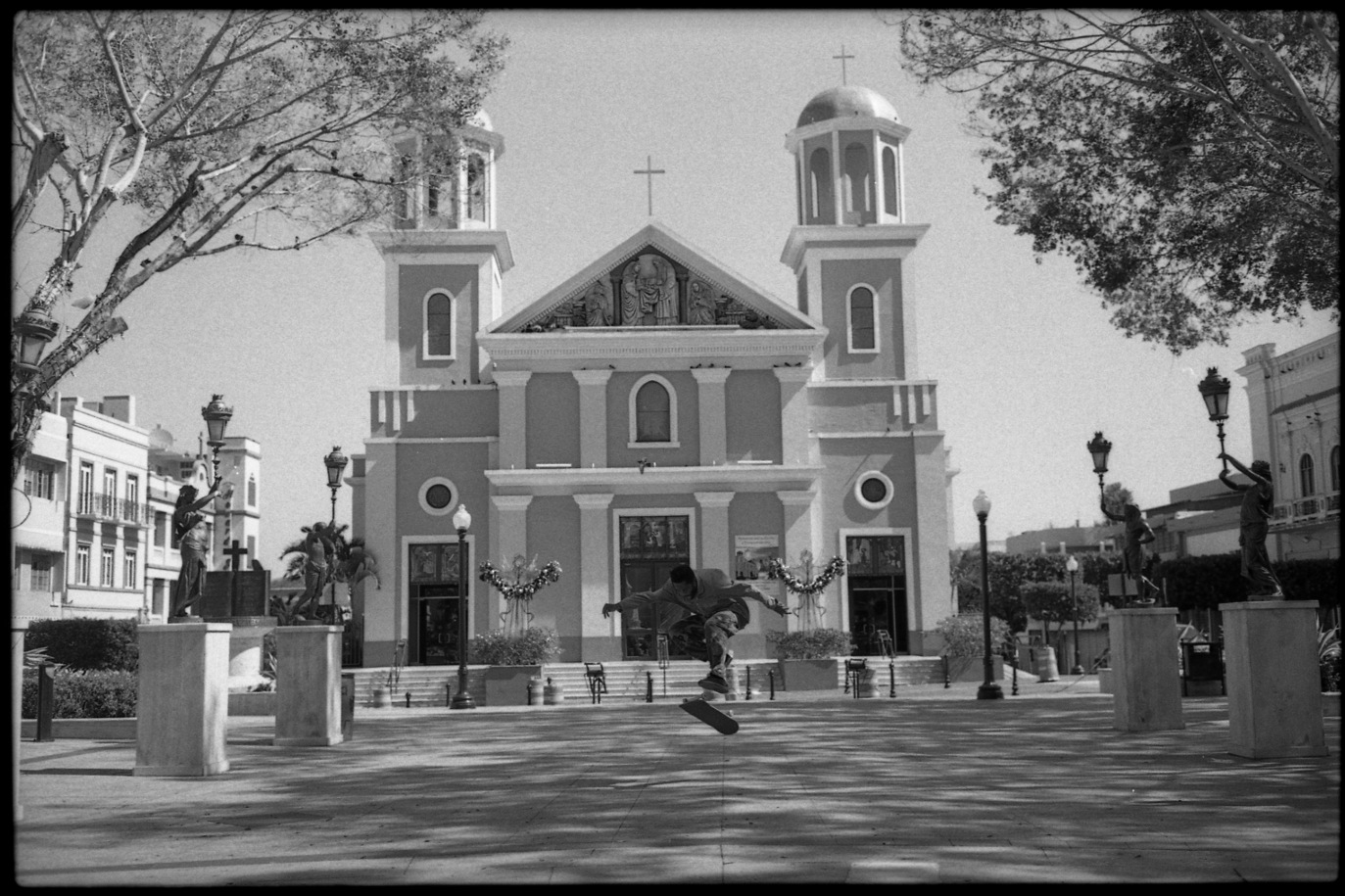 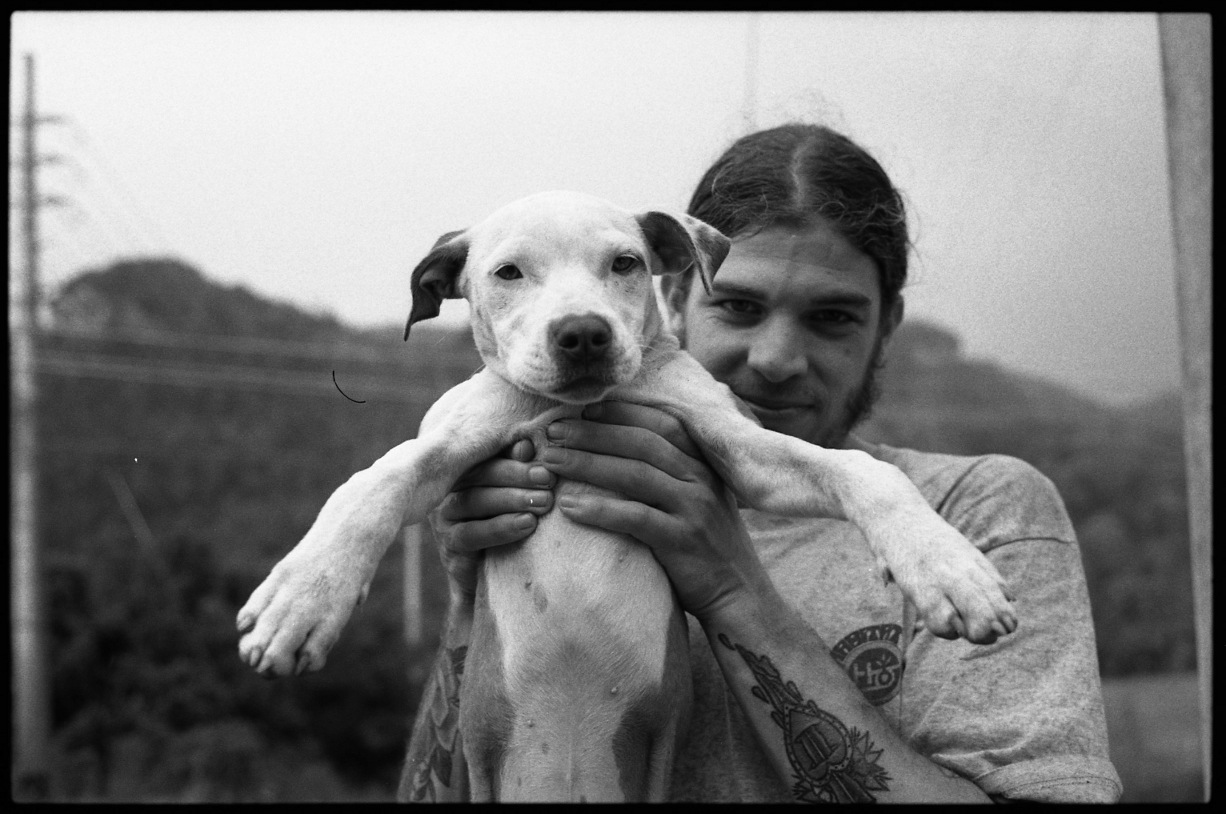 It reminded me a lot of where I grew up‚Ä¶Puerto Ricans, KFC's and bad drivers. The only difference was the architecture/marble plazas everywhere and the jungle. I honestly can't wait to get back!!! Pura vida!
-Brian Delatorre 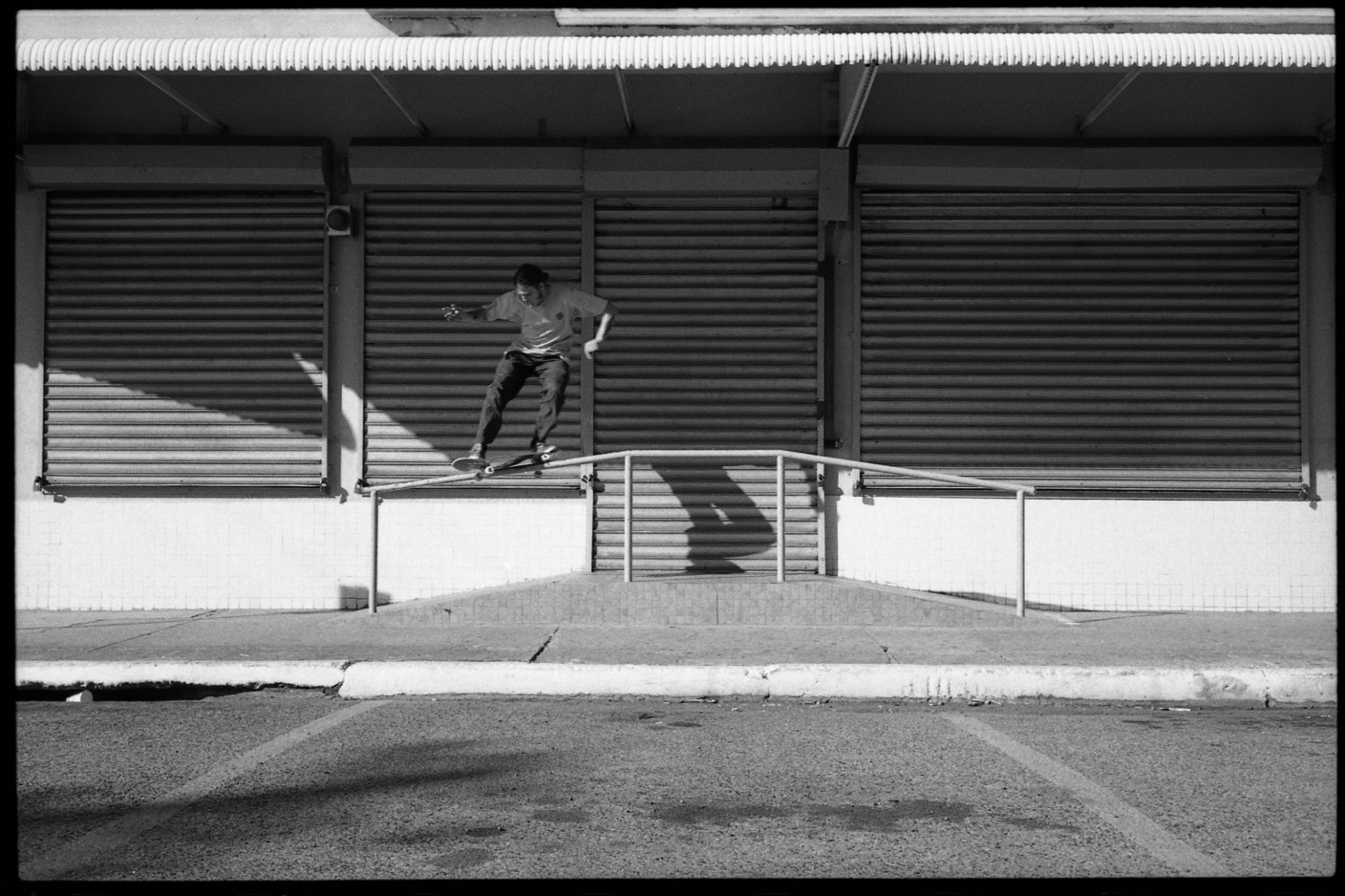 Brian Delatore frontside feebles all the way to paradise 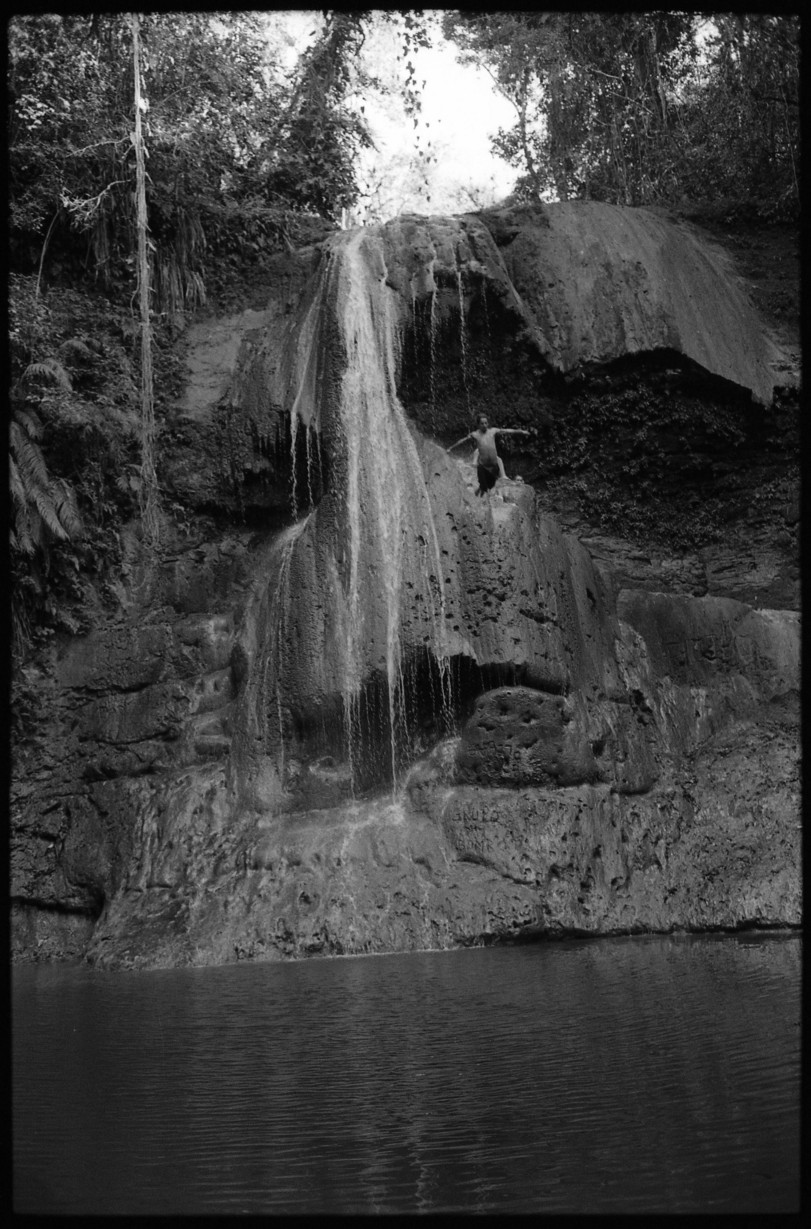 It was hot. Im talking thick. So humid you'd sweat right through a new shirt. The ground polished smooth, you could almost see your reflection. There were marble ledges everywhere. Some were curved, some were long. Some were small and some were tall. All of them were buttery. I saw my homies all warming up. 'I must be dreaming' I thought to myself. I caught a glimpse of the cops. The officer instantly on the loud speaker screams "OYE CHICOS!!" Some of us stopped rolling at the sound of the officer. I did‚Ä¶'Thats it. Its over. No warm up, no lines, no filming, no skating. NO MORE FUN '.... I  was clogged to my throat thinking how we went all this way..{The plane ride the rental van even the ferry ride.} And now its about to be all OVER. Nothing mattered. We knew we weren't supposed to be skating‚Ä¶"USTEDES PONEN SUS CAMISAS EN!!"....."PUT YOUR SHIRTS BACK ON!!!" Then they strolled off.. We knew we were in PUERTO RICO.
-Yonnie Cruz 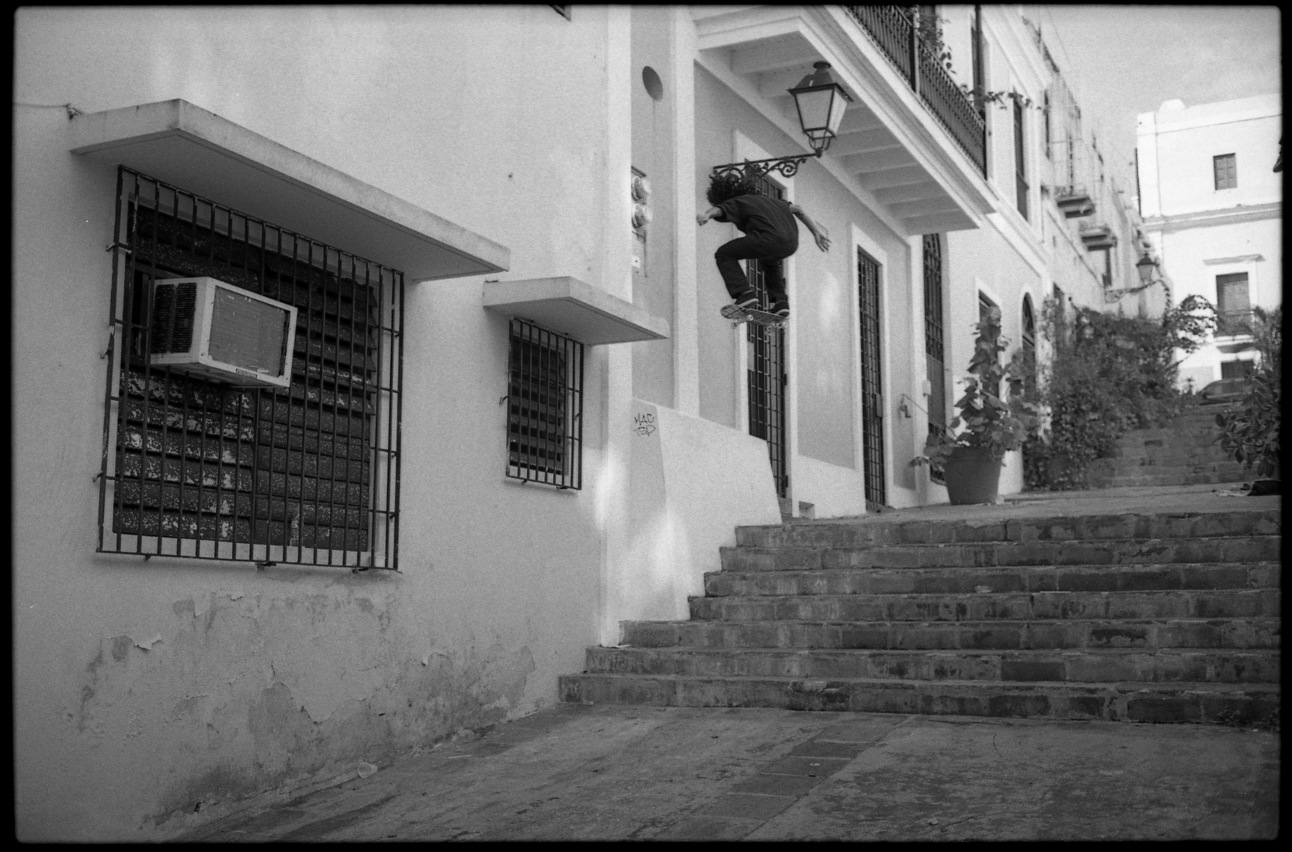 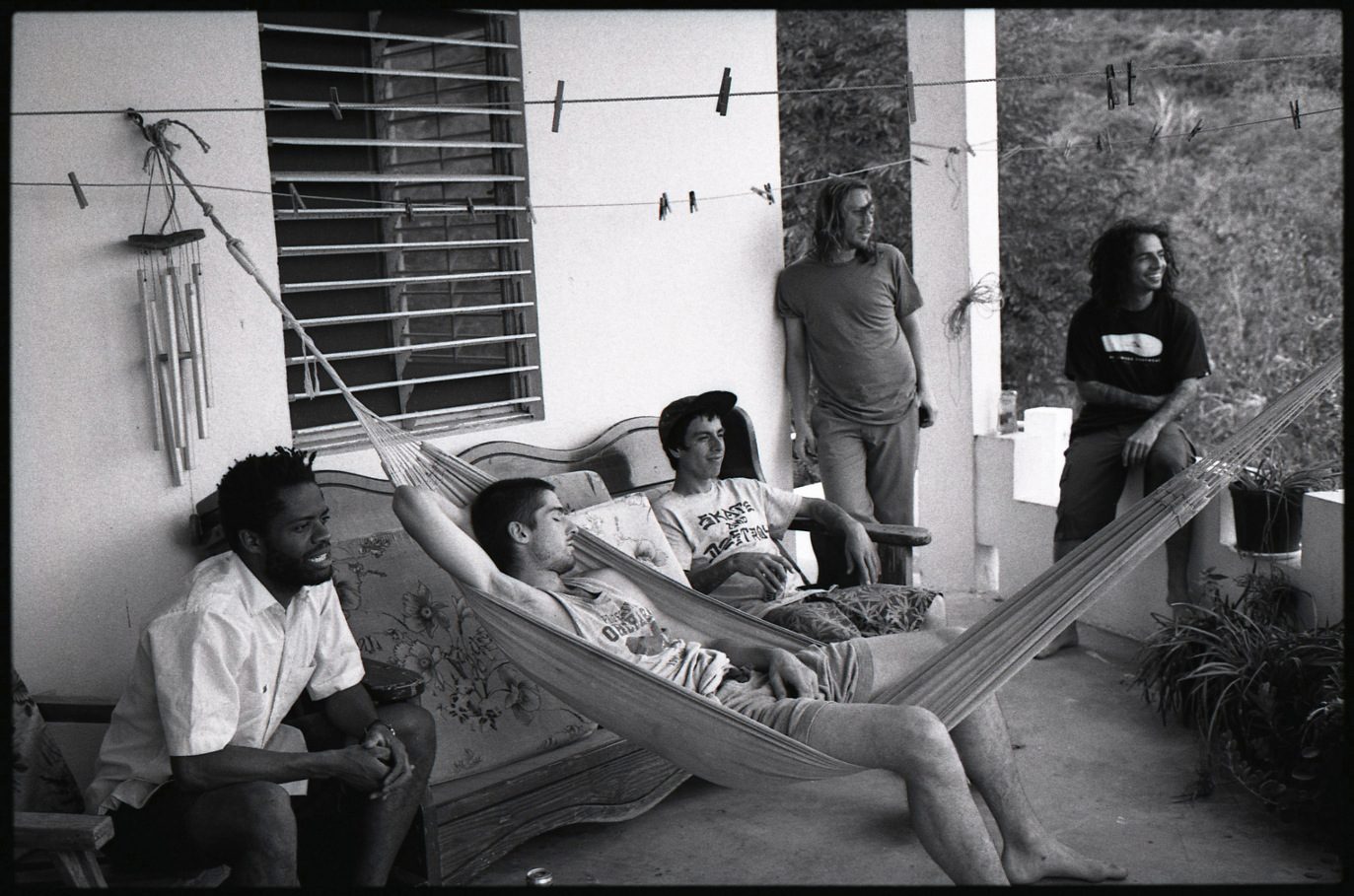 Puerto Rico is one of the most exciting places I have ever visited for skateboarding. The health of the people and the land are both quite becoming for the skateboarding man, and I'll tell you why. Puerto Rico is a small island, peppered with small towns and rural communities. It only takes a few hours (4or 5) to drive a circumference around the entire territory. The Carribbean culture has been blessed by the skate gods and a laid back, colorful, community-oriented attitude has been breeding throughout Puerto Rico's small towns and larger cities. This attitude can be seen in the colorful sidewalks and cast cement buildings, in the mostly passive attitude of security guards and police, and in the multitude of skateable town plazas, where locals congregate and party together throughout the week or during a holiday. Each city takes great pride in their plazas and it seems like alot of a town's money goes into revamping the layout of their plaza every few years. With the potential of a new plaza waiting around every corner, one of the most exciting parts of skating PR, is traveling in loops around the island, visiting small towns in the hopes of finding fresh marble, skateable water features, and open space. And for the record, there are over 90 of these plazas on the island, most of which are still "undiscovered" by skateboarders. The second anomaly of Puerto Rico, and possibly the most evident during our mobile outings, is the plethora of handicap curb cuts, wheel chair ramps, and bump to bars. In an urban American city like Philadelphia, bump to bars litter the streets, but are often built to accommodate people with handicaps related to violence and criminal activity. In Puerto Rico the opposite is found. The closeness to the equator, an abundance of hardy local foods and an all around jovial attitude towards life has given Puerto Ricans a rich percentage of elderly in their population. The elderly are given much respect and most businesses or personal residences are equipped with an easy solution for those who walk slow or move about in a wheelchair. BINGO, handicap ramps everywhere. It would be interesting to take a survey of all the skateable bump-to-bars in Puerto Rico. If I had to guess I'd set the bar at 200. I swear, on every corner, down every street, after every wrong turn we saw a new bump to bar. Awe-struck looks, screaming and u-turns we're never far apart when in the van and the time was passed quickly, as everyone scoured the streets, searching for the next best spot. Skate spots weren't the only thing we were searching for from the van windows. The "banana" game, made its way into our group and we all kept a keen eye out for privately owned yellow vehicles. Puerto Rico is also a gold mine for bananas.
The last skateable feature of Puerto Rico that I will discuss is directly related to the climate on the island. There is a huge amount of rainfall throughout the year, and I believe this is a determining factor for the easy going culture I have just described. Island people have to be patient and respectful. They have learned to accept the rain, accept the boundaries of their land, and appreciate the beautiful tropical climate, as well as manage the destructive tropical storms. They've built a series of giant water drainage ditches throughout Puerto Rico to help protect their rivers, tributaries, and towns. Some of these ditches are as vast as multiple football fields, with varying angles of inclines, banks, and hills. For a skateboarder, there's nothing quite like staring down a giant cement mountain and the isolated tropical setting of the ditches is just an extra bonus. Teams have been coming here for years to get a taste of the weathered concrete and intimidating size of these ditches.
So there you go. Thats my two cents on Puerto Rico. And I did'nt even mention how cheap airfare and the cost of living is, how beautiful the women are, or the exotic rainforests, waterfalls and beaches that can be found at every corner of the island. Maybe one day you'll get your priorities straight and go there to see for yourself.
-Jake Johnson