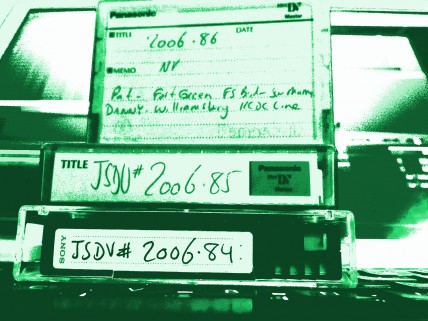 You can film for a month, go through 15 tapes and be lucky to capture 3-4 clips. And then randomly you'll end up getting 6 months of footage in just one week. I was digging through some old tapes the other day and came across a group of 3 incredible tapes on which we happened to capture some of the strongest and more memorable clips from Static III. Specifically of Pat Stiener. These demonstrate just how much Pat was on fire during the latter part of filming for Static in summer of 2006. This version of '3 Tapes' includes dope clips of Pat Stiener, Olly Todd, Danny Renaud and even Jack Sabback. Check it out.

Soon after I moved to NYC in the summer of 2006, Pat Stiener migrated north and found a couch to post up on for a little bit. The combination of both of us being anxious to wrap up Static III and having New York City at our disposal while most of skateboarding was still sleeping on the amazing city, proved to be insanely productive. As you can see in this version of '3 Tapes' Pat filmed a large portion of his video part w/in the 180 minutes confines of just 3 mini-DV tapes in 2006. Amazing. Sit back and check out the countless takes and additional makes Pat performed in some of these lines that you probably thought he only did once. Also featured on these tapes are the likes of Danny Renaud, Olly Todd and Jack Sabback.